Music in the Protestant Reformation: From Luther to Today 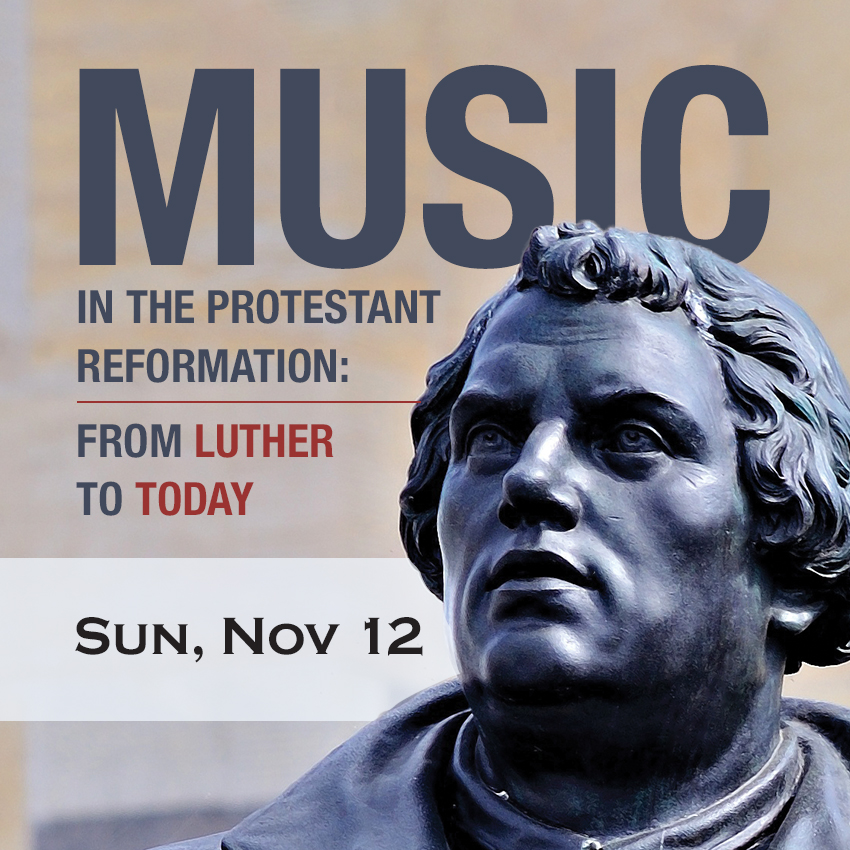 In order to teach and admonish, we need to know something. No qualified teacher speaks ignorantly; we need to be equipped with something worthwhile to offer. We need to be brimming over with solid knowledge of Christ and be sanctified by the truths of His word—and the Lord’s character is to govern our lives, including the music we offer to Him.

So, how has music—a vital component of Christian experience—revived and developed since the early days of the Protestant Reformation?

Like psalms, hymns were already part of Jewish worship in Jesus’ day. (See Matthew 26:30; Mark 14:26). After the decline of the ecclesiastical world during the dark ages, a key element restored by Martin Luther (1483–1546) was for music to be a tool to promote the gospel, not eclipse it. Luther composed hymns and chorales in the language of the people, preaching the incarnation, the cross, and the resurrection—all based around Scriptural truths. This is still the heritage of most hymns today. Many were penned by great pillars of the Christian faith and are filled with wisdom, rich doctrinal insight and a depth born from adversity and abiding trust in the Almighty.

John Calvin (1509–1564), another early Protestant leader, favored psalm singing. Psalms are directly inspired in Scripture and singing them makes their truths more accessible. The music of the psalters was known for simplicity and modesty, radiating with innocence and purity.

A spiritual song might express the joy of one’s salvation or extol the majesty and power of Christ. If God bestows musical talent upon us, we are duty-bound to develop it to His glory, not our own. Skill comes by applying one’s mental and physical powers to a task—and our Creator has entrusted all gifts with this aim in mind. We are told: “Sing ye praises with understanding” (Psalm 47:7). “I will pray with the spirit, and I will pray with the understanding also: I will sing with the spirit, and I will sing with the understanding also” (1 Corinthians 14:15).

Johann Sebastian Bach (1685–1750) feared God and masterfully harmonized many of the 5,000 chorales existing in his day. Then, the great hymn and anthem composers of the 18th and 19th century continued this practice with melodious tunes and pleasant tonal harmony. The results were positive: Scientific research links the style of music composed by Bach (and, to some extent, others also in the classical era shortly thereafter) with promoting positive frontal lobe activity in the human brain. The frontal lobe is the conscious, decision-making portion of the brain as well as the seat of religious conviction.

There’s no question about it. Musical styles have been changing, especially over the last 50 years. Is sacred music just to “swing” with the times or instead be based on healthy, edifying principles?

Today, the age of electronics is streaming the airwaves with music everywhere. Rock is the most common musical style, with 187 variations of it in 12 categories. Not all types are loud; some are fairly subtle, but all bear the same characteristic beat pattern.

Where did it all come from? What is its origin?

Actually, Rock music was built on a foundation of pride, rebellion, sensuality, illicit drugs, paganism, immorality and widespread blasphemy. What are its effects? Mounting evidence links the “stopped anapestic beat” (emphasis on the 2nd and 4th beats) of Rock drumming to muscle weakness, overstimulation of the adrenal glands, and an adverse effect on the ability to think and learn. The driving beat, hypnotic repetition, and sensuous “blues” harmonies actually produce a mesmerizing, drug-like effect on the human body, breaking down individual consciousness.

The only difference in so-called “Christian” Rock is the words. It’s part of the pop culture stemming from mass media and aggressive commercial forces to trigger raw emotion rather than inspire nobility of character. The products of the $3 billion-a-year Contemporary Christian Music (CCM) industry are typically characterized by light, often trite, quasi-religious lyrics with the same incessant backbeat (off-beat) as secular Rock, being designed to lure innocent young people into a carnal atmosphere of presumptuous counterfeit faith. It promises a mystical new worship experience, but too often constitutes a disturbingly irreverent paganization of modern worship. The attempt to modernize the church in such a way is lethal to real spirituality. It is a stark contrast to the historic genuine revivals among God’s people which moved forward successfully by first going back—back to promoting the self-denial of the cross and God’s standards of moral behavior.

What is our duty?

How should sincere Christians respond to insidious attempts to allow various forms of Christian Rock to creep into their worship services? Jesus has given us no example of timidity when confronted with evil. He boldly stood up to the moneychangers who polluted the sanctuary of God, revealing the importance of having courage to take a stand whenever the worship of the Holy One of Israel is at stake. We need to keep this in mind “and have no fellowship with the unfruitful works of darkness, but rather reprove them” (Ephesians 5:11).

How has CCM dragged people down spiritually?

Many today have been conditioned to assume that universal acceptance and tolerance for worldly affections and behavior is more important than exercising biblical discernment. Contemporary Christian songs utilizing Soft Rock, Pop/Rock, Country Rock and Easy Listening Jazz styles tend to support an easy, cozy falling-in-love-with-God feeling that carnal minds crave. Yet the lax, casual attitude that results is perilous in the antitypical Day of Atonement since “the thoughts and feelings combined make up the moral character”1 by which we are judged.

From a camp meeting in Indiana, U.S.A., near the turn of the 20th century, a minister wrote to Ellen White to express concern about the false doctrine there, bemoaning its influence that was egged on by the music. The Lord’s messenger foresaw:

“The things you have described as taking place in Indiana, the Lord has shown me would take place just before the close of probation. Every uncouth thing will be demonstrated. There will be shouting, with drums, music, and dancing. The senses of rational beings will become so confused that they cannot be trusted to make right decisions. And this is called the moving of the Holy Spirit.

“The Holy Spirit never reveals itself in such methods, in such a bedlam of noise. This is an invention of Satan to cover up his ingenious methods for making of none effect the pure, sincere, elevating, ennobling, sanctifying truth for this time.”2

A healthy fear of God

The early Christians feared God. This was not so much a fear of incurring His wrath as of disappointing the Lord whom they adored. It was not so much a dread of suffering as a dread of wrongdoing. Likewise, faithful worshipers in Old Testament times had the same reverent attitude when they bowed in holy awe before the King of kings.

Yet, today, instead of heeding the opening command of the three angels’ messages, “Fear God and give glory to him; for the hour of his judgment is come” (Revelation 14:6), most are more eager to foster self-esteem and self-glorification than to humbly please the Almighty and “abstain from fleshly lusts, which war against the soul” (1 Peter 2:11).

The primary purpose of music in worship is to prepare our minds for the reading and presentation of God’s word. The words of Christ are spirit and life (John 6:63), so Scripture is to be the focus and main emphasis of the service, not the music. Also, the priority in music is not to be whether people like it, but rather whether God likes it—whether it reflects His holy, majestic character. The result of a worship service should be to teach truth that will convict souls of His Word, not try to instigate an entertainment-based “high.”

Ongoing reformation: What needs to be reformed?

We are warned that Nadab and Abihu, the sons of Aaron, “offered strange fire before the Lord, which he commanded them not” (Leviticus 10:1). The word here rendered “strange” also indicates “profane” and reminds us that God is particular about the offerings presented before Him. As a result of their irreverence, “fire went out from the Lord and devoured them, and they died” (Leviticus 10:2) revealing God’s displeasure.

Likewise, when deciding about appropriate music in the worship of God, we need to ask:

Music enters the brain through the temporal lobe and immediately the limbic system—the seat of emotion—responds. So, the first thing affected is our feelings. Some music then favorably affects the frontal lobe—the seat of reasoning, intellect, and religious conviction. It reflects the principles of Philippians 4:8, inspiring qualities that are true, honest, just, pure, lovely, of good report, virtuous, and praiseworthy. As mentioned, scientific research links Baroque and general classical-style music (typical styles found between the years 1600–1850, more or less) to healthy stimulation of the frontal lobe.

But music with a repetitive off-beat, as in Rock, is actually linked to frontal lobe shrinkage. Can we really afford to have our frontal lobes shrunken right now? If not, why not?

The seal of God vs. the mark of the beast

We live in a uniquely solemn hour. Since 1844, our Advocate has been pleading in our behalf in the most holy place of the heavenly sanctuary. The cases of all who have professed the name of Christ are being presented before the court of heaven.

“All who would have their names retained in the book of life should now, in the few remaining days of their probation, afflict their souls before God by sorrow for sin and true repentance. There must be deep, faithful searching of heart. The light, frivolous spirit indulged by so many professed Christians must be put away. There is earnest warfare before all who would subdue the evil tendencies that strive for the mastery. . . .

“The judgment is now passing in the sanctuary above. For many years this work has been in progress. Soon—none know how soon—it will pass to the cases of the living. In the awful presence of God our lives are to come up in review.”3

We are judged according to our deeds and the motives that prompt them. “Many do not realize what they must be in order to live in the sight of the Lord without a high priest in the sanctuary through the time of trouble. Those who receive the seal of the living God and are protected in the time of trouble must reflect the image of Jesus fully.”4 This means to have cultivated the actual character of our Lord and Master, nothing less.

The frontal lobe and our salvation

Those who receive the mark of the beast will receive it in their right hand or in their forehead (Revelation 13:16)—meaning they will either behave wrongly or will believe wrongly. But the seal of God (Revelation 7:2, 3; 20:4) is placed only in the forehead, that is, settled in the frontal lobe of the brain.

What does this have to do with music? We saw earlier the link between certain styles of music and the frontal lobe. Therefore, isn’t it logical to choose musical styles that help us receive the seal of God—not hinder us?

The aim of the Protestant reformation spearheaded by Martin Luther was for music to be a tool to enhance the clarity of the gospel—not to be a distraction to entertain itching ears and lull souls into the ease of carnal security. There’s too much at stake now! Reformation must live on. Let us not grieve our Lord with worldly lifestyles and carnally-driven music. There’s no time to lose, “for the time is come that judgment must begin at the house of God: and if it first begin at us, what shall the end be of them that obey not the gospel of God?” (1 Peter 4:17).